Well, we are now four days post-festival and we’re still basking in the awesomeness that was Treefort Music Fest 2015. After going over our numbers for the Treefort Lineometer, I gotta say I’m impressed. Every single person who contributed to this project is seriously a rockstar. We were featured as one of the best parts of the festival by David Greenwald at The Oregonian in his article 26 things we learned at the 2015 Treefort Music Fest. Check it out:

3. Having a line-checking app to tell you about Thursday’s biggest line is the smartest festival technology ever.

We were also mentioned by Michael Deeds at the Idaho Statesman in Smile. Treefort has that effect on everyone.

Remember when Treefort debuted with what seemed like an insanely large number of bands? 130 or so? This year’s 430 makes that seem like a backyard keg party. And the waits outside certain venues were longer on opening night than they’ve been in past years. The Treefort app’s live “venue tracker” accurately reported the line at Neurolux as “entire population of Boise” on Wednesday night.

Our @treefortlines twitter gained 85 followers in 5 days and will surely grow over time. Wade led the social media push throughout the festival and created a ton of engagement by doing so. Before I get into all the details and statistics, I just wanna say thanks again to all the people who worked on this project. None of this could have happened without them. If you don’t already, FOLLOW THESE GUYS. They are doing (and will continue to do) great things in their careers, and are major influencers in the software scene in Boise. Here are links to their twitter profiles:

I’ve linked the Google Analytics PDF reports below, but here is a brief summary. The official Treefort app (into which the venue tracker was embedded) was released on 03/20/15 and the festival ended on 03/29/15. This is our date range for all the metrics listed here and linked in the reports.

Here is a chart of hourly pageviews. It is really cool to see the nightly usage!

Here is a bar chart of our users by browser. As you can see, most Treeforters use iPhones; but Android certainly made a good showing.

I also found this map of sessions by city kinda cool. Sorry foreign visitors—you only account for 1.03% of sessions. 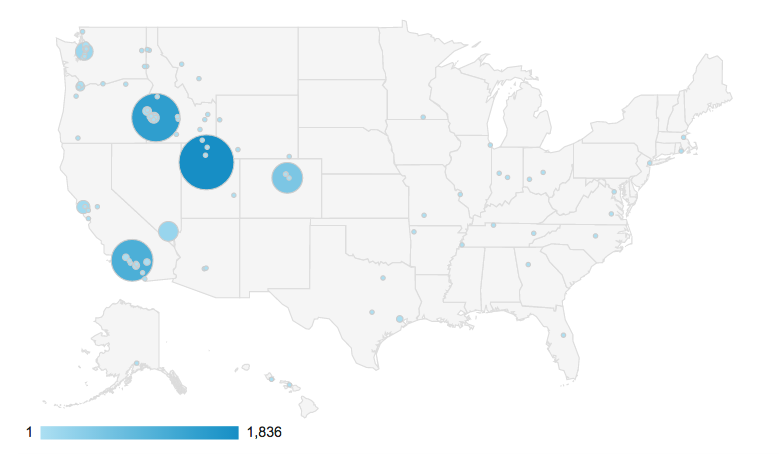 Based on interviews with several venue managers and festival attendees on the first few nights, we decided that the addition of an “At Capacity” status would be useful. Before adding this feature, many venues that were packed inside would show a “Sea of Humanity” or “Entire Population of Boise” line status when their lines actually had only five or so people in them. Now, when the venue is “At Capacity,” the line will only shrink if people leave the venue, giving a more accurate reading and helping festival attendees make the right venue choice (and thus make the most of their night). After a quick mock-up, Wade came to the rescue and added this feature before Hackfort, which we all attended. On the left is the manager screen and next to it, the visitor. Props to Wade again for cranking this out and adding this last-minute value.

I’m speaking for the team who built this app when I say that I know we would all love to do something like this again next year. I’m looking at you, Treefort! ;). This was one of the most rewarding software development experiences I personally have had and I’m incredibly grateful to the team. A message to everyone who used The Lineometer, built The Lineometer, and updated The Lineometer…