Well folks, I’m writing this year just before Treefort Music Fest ’15 to announce the project that some of my righteous coworkers and I helped create…the Treefort Lineometer! Because I didn’t have much to do with the technical side of the app this year, I’ll just give an overview of the features, the major technologies we used, and award some kudos to all the hardworking developers that helped out with this project.

All of these guys worked their asses off for this feature; I was mostly a pencil pusher and project manager. But I DID check in code…once. 😉

NOTE: They all did much more than what I’ve mentioned next to their names; this is just a brief summary. Special thanks to Drew Lorona and Eric Gilbert at Treefort Music Fest for facilitating this app!

After Treefort 2014, I met with Phil Merrell and some other prospective developers for beers and to brainstorm about what technological improvements we could make for this year’s festival. We came up with some great ideas and let them simmer until I got back in touch with Phil this January. We immediately got the ball rolling on what we thought would add the most value for the least amount of work (borrowing from the 20/80 Pareto principle commonly referenced in SCRUM). That project would eventually become The Treefort Lineometer, and with Phil’s help, it would be embedded as a tab in the Sencha touch app he built for Treefort!

With help from Phil and the people at Treefort, we were lucky enough to get our Venue Tracker in the Treefort Music Fest iOS and Android apps. The Sencha touch framework that Phil used made integration relatively easy; more or less we get a web view inside the app to do what we want with!

For our team, some notable obstacles were:

Download the Treefort Music Fest app and use it at the festival! Get up-to-date information about which venues have the longest lines. If you are a venue manager, don’t hesitate to contact me personally or any of the members of the team. We will be monitoring and providing updates throughout the festival on our Treefortlines twitter account, so feel free to contact us there too! 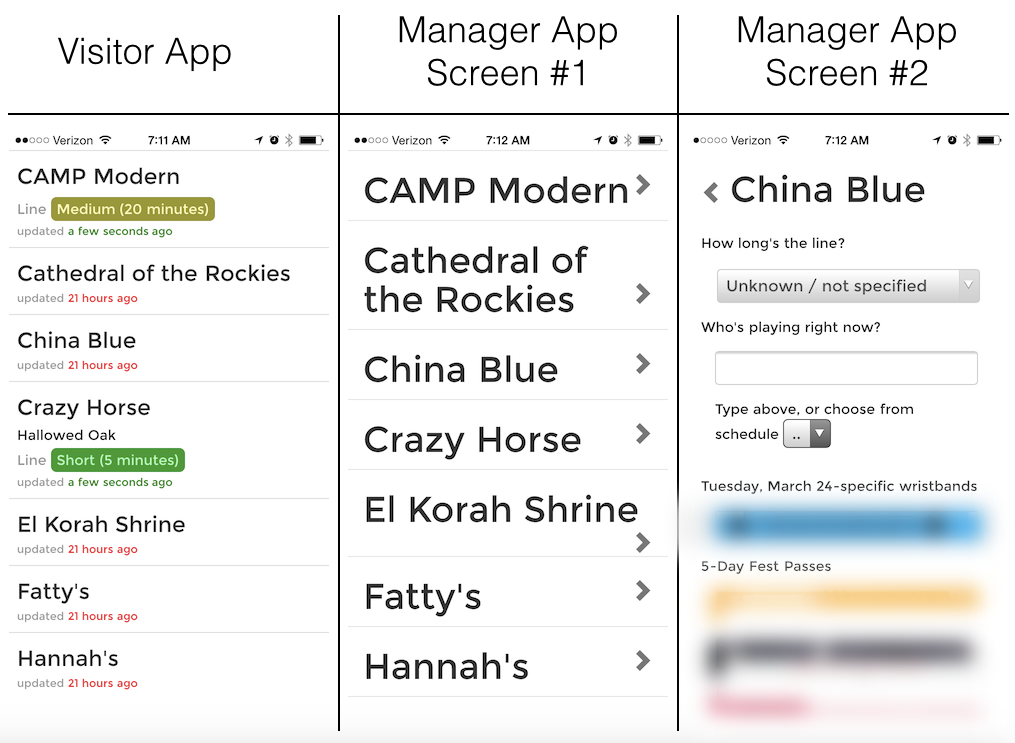 If you liked this, consider reading the retrospective as well