Well well, where to start. There is so much to say and quite frankly, I’m tired and don’t want to say much. But I guess I’ll start at the beginning, some might say writing my thoughts down is therapeutic, others would say its a bit … daunting. However I think of this as a good way to use my time, to inform my family, and if anything help others in the future or present that have dealt with this disease. 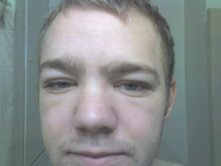 It started on the Monday before Halloween, a typical visit to the local university health center and what would later become the start of my journey. No this isn’t a picture of me after my last cage fight, this is what my face looked like in the morning. YIKES haha, this is what prompted my initial doctors visit. Little did I know this picture would be essential to my final diagnosis. After a urine and blood test, my local Physicians Assistant decided I needed to see a Nephrologist (Kidney Guy). To my dismay I had never even heard of this crazy kind of doctor and I had my worries. Thoughts of dialysis, blood transfusions, and endless waiting rooms flooded my mind.
His initial thoughts was something to the effect of Nephrotic Syndrome (Kidneys Dumping Protein). Which I later learned is basically doctors speak for (Nephrotic – Having to do with Kidneys) and (Syndrome – Something Wrong with Previous Word) so all I knew was my Kidneys were jacked. We would know more after a kidney biopsy … At least we thought.
Now we are at about day three of this whole whirlwind adventure and into the hospital I go, first some blood tests, a chest x-ray, and the final event! Kidney Biopsy. As I was waiting to be discharged from my doctor, yet another three hour wait, we get the worst news of the year.
The doctor says “Well I’ve been looking at your chest x-ray … and there is a large mass in your chest. We need to keep for a few days for observations.”
I respond “Well what do you think this is?”
He says, “Most likely some form of cancer…Hodgkins we think.”
I am later informed that the very next day we are going to need to remove the very swollen lymph node in my neck (not a comfortable surgery). Long story short … I get the diagnosis we aren’t looking for after a four day hospital stay. The following Monday, sure enough Hodgkins Lymphoma. Not only was this the worst news of the year, it came only a day after my Mom’s birthday. Talk about bad timing.